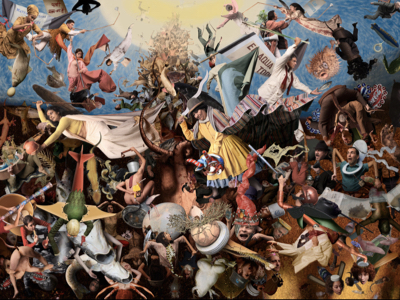 As the wealth-divide and environmental crises grip public awareness, the world is finally catching up to the vision and ideas of Carole Condé and Karl Beveridge — pioneering artist-activists who have been working for social change since the mid 70’s.

“The way Owen and Miller have brought all the many strands of these two creative arts workers’ lives and work together is masterful.”
Rachel E. Beattie, OUR TIMES magazine

The journey of this film began one winter night in December 2007. Jim and I were at Carole and Karl’s for dinner and popped up to their studio to see what they were working on. They were at the beginning stages of producing an extraordinary Bruegel-inspired staged photograph. Where Bruegel’s work was about the counter reformation, Condé and Beveridge were depicting activists from around the world fighting to take back water rights from global corporations such as Suez Water, Coca Cola, Bechtel, and Nestlé’s.

Suddenly it felt crazy that more people didn’t know about Condé and Beveridge’s work. As we sat down for dinner it popped out of my mouth “We have to make a film about you two.” We began filming the making of The Fall of Water later that week. From that very early footage we created a trailer that helped us raise funding to shoot PORTRAIT OF RESISTANCE.

It has always struck me that Condé and Beveridge’s photographs are like film stills. What excited me most about making this film was the idea that I could bring some of their still images into time, to allow subjects to step out and speak in their own words. We met migrant workers who have spent 25 years working on Canadian farms, yet still have few rights. We filmed two Oshawa women who, in the early 70’s, helped break down male hierarchies in both the auto plant and the union. We witnessed the ruins of Carole’s family cottage in the shadow of the Nanticoke power plant — North America’s worst greenhouse-gas polluter. And we joined Carole and Karl, along with thousands of protesters who stood against police in riot gear at Toronto’s 2010 G20.

It is my hope that PORTRAIT OF RESISTANCE will travel the world so that Condé and Beveridge’s work will be appreciated and loved by many more people.